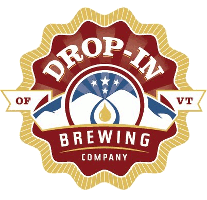 To go beer is available for curbside pick up or you may come in to purchase your beer. We encourage you to call ahead to place your order at (802) 989-7414 or order online HERE.

We operate a tasting room selling beer by the glass, sampler flights, canned beers, and growler fills.  Drop-In Brewery is also the Brewing home of the American Brewers Guild Brewing School (www.abgbrew.com) which is also owned and operated by Steve Parkes and Christine McKeever. Steve Parkes is an industry figure with a national and international reputation. He holds a degree in brewing science from Heriot-Watt University in Edinburgh Scotland and has brewed professionally continuously since graduating in 1982. He started the first microbrewery in Maryland back in 1988. He has been a regular speaker on the National Craft Brewers Conference and National Brewpub Conference stage. He is a Great American Beer Festival, and World Beer Cup judge. He has hosted the Institute of Brewing Studies “Ask the Expert” Q & A forum and is a former member of the IBS troubleshooting committee, and National Board of Advisors. He was technical editor of the highly successful Brewpub magazine, and contributing columnist to American Brewer Magazine, and All About Beer magazine. He has contributed material to two brewing science textbooks, including the chapter on brewhouse practices to the Master Brewers Association of the Americas book Practical Handbook for the Specialty Brewer Vol 1, and provided several entries to the Oxford Companion to Beer including the entry for The Brewing process.  He has served as a technical editor on several textbooks published by the Brewers Association. He has served as chairman of the Northern California Section of the Master Brewers Association of the Americas, and Technical chair in California and New England. The Ronn Owens FM radio show hosted Steve twice a year as their featured beer expert guest. In 2009, Steve was awarded the Russell Schehrer award by the Brewers Association for Innovation in Craft Brewing, the industry equivalent of a “Hall of Fame”. He was recently interviewed to be a part of a documentation of the history of Craft brewing in America. The brewery he has built is a showcase of science and technology. A 15 bbl brewing system, with a mill and high pressure steam boiler, makes the wort. Four fermenters and a properly designed system to maintain and store healthy yeast make sure the beer is superbly made. The small brewery owns its own canning line. But the biggest advantage is the well equipped laboratory that is used to guarantee quality. You can stand in one place and see the whole brewery but if the brewer is there the door is always open.