Included in your ticket price is a welcome beer, a guided tour from Champlain Valley Hops staff, a picnic meal from Lucky Star Catering, and a discussion panel with 4 Vermont Brewers.  We will also have beer available for purchase throughout the event.

Every ticket holder will be entered to win a YETI lunch box and colster.  The winner will be picked at the event and can take home their prize then.

7:15 – The panel discussion will begin, there will be time for questions at the end.

The picnic meal is prepared by Katie Baas, chef and owner of Lucky Star Catering. Katie started Lucky Star Catering as an expression of her love for creating hand crafted, from scratch, locally sourced food for her clients. Katie’s food harkens to her southern & midwestern roots…familiar, comfortable fare inspired by the pastoral landscapes of Vermont. Focusing on the culinary tradition of sourcing local, seasonal ingredients, she has immense gratitude & respect for the agricultural spirit here in the Green Mountains, this meal is sure to be exceptional. 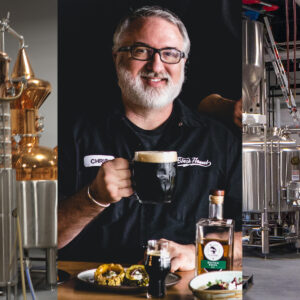 Chris has a business degree from University of Vermont with a concentration in Management Information Systems. In the first decade of his career, he rose quickly from programming jobs, into team leadership, then management positions eventually in charge of hiring and managing 4 departments for an IBM vendor company in Essex Junction. Finally succumbing to his natural entrepreneurial instincts, he founded a web design, development and marketing company (Earthlogic, Inc. in May of 1998). 15 years later, he founded a second company (Logic Properties, LLC) and purchased an old Church building in Essex Junction. After renovating the building, he began using it as a base of operations for Earthlogic, brought on a local co-working space (Excelerate Essex), and most important – began his home brewing career in the basement.

Fast forward to 2017, Chris was top 2 in the state-wide Make the Cut competition. Many home brewing awards later, he was named Vermont Homebrewer of the year in 2018 and followed up with back to back wins (along with Justin Rito) in 2019. 2017 also put Chris on the path to aggressive beer education – he hosted a year long BJCP study group and a 9 month Cicerone® study group with both ending in successful certifications. Chris is currently only one of two people in Vermont that is both a Certified Cicerone® and a Certified BJCP beer judge (Amy Todd from Zymology Labs being the other). He is hosting another round of each hoping to advance to the next levels (Advanced Cicerone® and National BJCP Beer Judge). In 2018, Chris also earned a certificate in the business of Craft Beer at UVM. 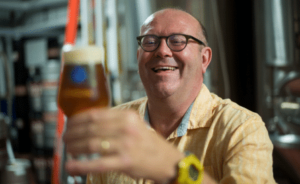 Steve Parkes is an industry figure. He has been a regular speaker on the National Craft Brewers Conference and National Brewpub Conference stage. He is a Great American Beer Festival, and World Beer Cup judge. He has hosted the Institute of Brewing Studies “Ask the Expert” Q & A forum and is a former member of the IBS troubleshooting committee and National Board of Advisors. He was the technical editor of the highly successful Brewpub magazine, and a contributing columnist to American Brewer Magazine, and All About Beer magazine. He has contributed material to two brewing science textbooks, including the chapter on brewhouse practices to the Master Brewers Association of the Americas book Practical Handbook for the Specialty Brewer Vol 1, and provided several entries to the Oxford Companion to Beer. He has served as a technical editor on several textbooks published by the Brewers Association. He has served as chairman of the Northern California Section of the Master Brewers Association of the Americas, and Technical chair in California and New England. In 2009, Steve was awarded the Russell Schehrer award by the Brewers Association for Innovation in Craft Brewing, the industry equivalent of a “Hall of Fame”. 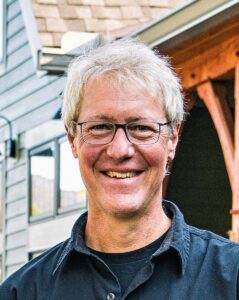 Sean Lawson is originally from the New Jersey shore area, where he developed a love of the outdoors at an early age. Family ties brought Sean to Lake Morey in Vermont many summers as a child, where he got “hooked” on the Green Mountains. Sean moved to Vermont in 1988 to pursue studies at the University of Vermont (UVM) and discovered a love of both beer and homebrewing. He graduated in 1992 with a Bachelor’s degree in Ecology and Environmental Studies.

Sean’s post-graduate work focused on Forestry and Outdoor Education, with positions as a Park Naturalist at Vermont’s State Parks, a Program Coordinator for the Vermont Monitoring Cooperative forest health project, a wildlife educator with Keeping Track and research work with the University of Vermont as well as The U.S. Forest Service. In 1996, Sean founded the Naturalist Program at Mad River Glen, an outdoor education program that he still leads today, featuring seasonal and full moon guided snowshoe treks, where he met the love of his life Karen! Sean returned to UVM in 1997 for graduate school and research on Vermont’s high elevation spruce-fir forests, graduating in 1999 with a Master’s degree in Forestry.

In 2008, after much encouragement from family and friends and accolades for the quality of his homebrew, Sean launched Lawson’s Finest Liquids as a hobby-scale side business in a humble outbuilding next to the Lawson’s family house in Warren, VT. Lawson’s Finest quickly became a highly-sought after Vermont craft beer, sparking an expansion in 2011 at the original location, a contract brewing arrangement in 2014 with Two Roads (launching our #1 flagship – Sip of Sunshine IPA) and culminating in the opening of a new production brewery, taproom, and retail store in Waitsfield, VT in October of 2018.

Sean and Karen have two daughters, ages 13 and 17. Sean loves to attend his daughter’s basketball games, skiing, hiking, treks through the woods, live music (especially the VT boys – Phish!), travel with his wife Karen and dining out. Of course, a love of great beer pervades daily life and whenever possible, travels often include collaborations and stops at other breweries. 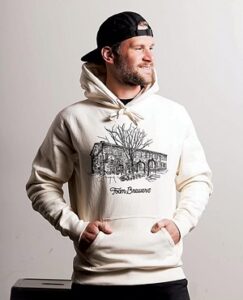 After graduating college with a degree in food science & human nutrition, I started my career in making beer. After several years in the industry my partners and I opened the doors to Foam Brewers on the beautiful Burlington waterfront. Since that time we’ve brewed 800 unique beers and have met so many amazing and talented people along the way. We strive to do our best to support those in our community with a focus in the arts, VT agriculture, and Lake Champlain clean up.

This a 21+ event, no pets (with exception of service animals) and children will not be admitted into the event. Please feel free to bring picnic blankets and remember to layer as mid-September gets chilly.

This ticket is non-refundable.

We look forward to enjoying this special evening with you, thank you for supporting the Vermont Brewers Association and we can’t wait to show you all the magic that Champlain Valley Hops has to offer. If you have any questions please email [email protected]